Golf coaching is all about you and what you want to get out of your game. We pride ourselves on being good listeners and aim to provide the best possible professional advice, whilst ensuring each lesson is tailored and enjoyable for the golfer.

Every golfer enjoys the game more when they’re hitting good shots and playing well. This is our mission for you.

Maybe, you had too many three-putts as a result of poor distance control? Or did you miss too many fairways to the right meaning you had to chip out sideways? It could be that you play well in practice rounds with your friends but struggle to replicate that in competitions?

Through our experiences in the game and our PGA education, we appreciate that every golfer is different. That’s why we offer a range of lessons and packages to suit everyone. 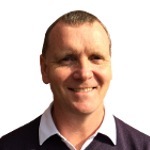 Russell has been a golf professional for 32 years, 23 of those as head professional at Ludlow Golf Club. He qualified as a professional through the PGA Training School in 1987 and worked as a teaching professional at Wexham Park GC in Berkshire, before taking up his first head professional position at Leominster GC. He won a number of events as a professional in his 20s, highlighted in representing Wales in the European Teaching Pro’s Championship in the Netherlands. Another great moment was playing a few holes with Seve in 1992. In 2003 Russell added to his duties at Ludlow by taking on the role of Administrator and now looks after the day to day management of the golf club. He has developed a series of very successful Open Competitions at Ludlow which attract over a thousand visitors every year.
Book a Lesson Book a Fitting

Dan started playing golf in 1990 at Leominster Golf Club, in Herefordshire and soon realised that he wanted to become more involved in the golf industry as a career. Starting work in the pro shop, under the tutelage of Russell Price, who was the Head Professional at Leominster GC, Dan learned the day to day tasks of running a pr oshop and what was required of a Golf Professional. In 1992 Dan made the move to Ludlow Golf Club, with Russell, where they remain to this day as a strong professional partnership. Dan turned professional in 1994 and became a fully qualified PGA member in 1997. Since then he has tried to balance his role in the pro shop with competing in regional PGA events, club repairs and teaching. With moderate success on the links, at Midland level and a number of wins at County level, including becoming the Staffordshire & Shropshire PGA Alliance champion in 2000, shooting two course records in the process, Dan has devoted his time more in the areas of teaching and club repairs. Having built an excellent reputation in club repairs and customisation, a number of club professionals, based at local clubs turned to Dan for their repairs also. During his time at Ludlow GC Dan has built a solid reputation for his teaching, which is his main area of focus. With the ability to communicate with beginners and advanced players alike, Dan has found success in getting beginners into golf and, subsequently into the club as members. Equally, Dan has taught numerous members who went on to become Club Champions, County Champions, County Team members and National Team members.
Book a Lesson Book a Fitting

Whilst we investigate, please read our page on the email whitelisting and ensure you've added me to your Safe Senders list